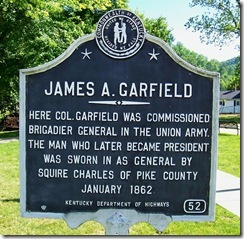 Marker Text: Here Col. Garfield was commissioned Brigadier General in the Union Army. The man who later became President was sworn in as General by Squire Charles of Pike County, January 1862.

Location: In the Pikeville City Park in Pikeville, KY, on Route U.S. 119 and 460, Huffman Avenue. Erected by the Kentucky Department of Highways.

Following the end of the American Civil War, many of the officers on both sides ran for public office being elected to Congress, Governors and/or U.S. President. One individual who served in public office both before, during and after the civil war was James A. Garfield, the 20th President of the U.S. Garfield is probably remembered by most as the second president to be assassinated while serving as President. At the time James A. Garfield was promoted to Brigadier General in January 1862, he was 30 years old, making him the Union Army's youngest General, which this marker observes.

James A. Garfield was the last of the log cabin Presidents and during his short time as President, he attacked political corruption and won back for the Presidency a measure of prestige it had lost during the Reconstruction period. 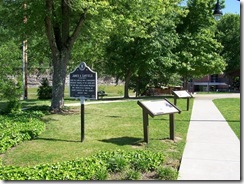 He was born in Cuyahoga County, Ohio, in 1831. Fatherless at two, he later drove canal boat teams, somehow earning enough money for an education. He was graduated from Williams College in Massachusetts in 1856, and he returned to the Western Reserve Eclectic Institute (later Hiram College) in Ohio as a classics professor. Within a year he was made its president.

Garfield was elected to the Ohio Senate in 1859 as a Republican. During the secession crisis, he advocated coercing the seceding states back into the Union.

In 1862, when Union military victories had been few, he successfully led a brigade at Middle Creek, Kentucky, (near Prestonsburg, KY) against Confederate troops. It was after this battle that Garfield was promoted to Brigadier General.

Later in 1862, Ohioans elected him to Congress. President Lincoln persuaded him to resign his commission. Lincoln argued that it was easier to find major generals than to obtain effective Republicans for Congress. Garfield repeatedly won re-election for 18 years, and became the leading Republican in the House of Representatives.

At the 1880 Republican Convention, Garfield failed to win the Presidential nomination for his friend John Sherman. Finally, on the 36th ballot, Garfield himself became the "dark horse" nominee. By a margin of only 10,000 popular votes, Garfield defeated the Democratic nominee, Gen. Winfield Scott Hancock, another famous Civil War Union General.

A few interesting facts about Garfield, I discovered along the way is that Garfield was a minister and an elder for the Church of Christ (Christian Church), making him the only member of the clergy to date to serve as President. Garfield preached his first sermon in Poestenkill, New York, though his preaching career was short, he decided he would rather serve in education.

Garfield is the only person in U.S. history to be a Representative, Senator-elect, and President-elect at the same time. He is so far the only Member of the House of Representative to be directly elected President of the United States. For more information about Garfield visit the White House History site or the National Park Service web site on Garfield's Ohio Home.

Posted by Little Bits of History at 10:18 AM