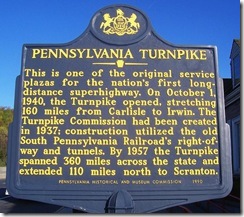 Marker Text: This is one of the original service plazas for the nation's first long-distance superhighway. On October 1, 1940, the Turnpike opened, stretching 160 miles from Carlisle to Irwin. The Turnpike Commission had been created in 1937; construction utilized the old South Pennsylvania Railroad's right-of-way and tunnels. By 1957 the Turnpike spanned 360 miles across the State and extended 110 miles north to Scranton.

Last October was the 70th Anniversary of the opening of the Pennsylvania Turnpike and since I am originally from Pennsylvania the ongoing joke was that the turnpike might be 70 years old but it is still under construction. I remember traveling on the turnpike in the 1960's during family vacations and as a kid the road was both fascinating and boring. The scenery from the road was not particularly exciting until you got to a tunnel and these were probably the first and only tunnels I can remember going through as a kid. I remember many trips stopping at the service plazas where this marker is located on either the east or west bound lanes. (There is a similar marker at the east bound service plaza.) While travel on the turnpike was not exciting for kids on vacation, the highways was important to the development and history of Pennsylvania and automobiles.

In the early history of Pennsylvania, the Allegheny Mountains always presented a barrier to travelers moving east and west. Wagon roads, canals, and railroads had long connected the two ends of the state. U.S. Route 30, the Lincoln Highway, which parallels much of the present day turnpike, was one of the first roads constructed for automobiles linking Philadelphia and Pittsburgh. Route 30 like many roads of its day was developed from older wagon roads laid out over the landscape and it was inadequate for the volume of traffic to travel safely, the road grades were steep and mountain passes often treacherous through snow, ice, and dense fog. In addition, Route 30 passed through the middle of many towns, where traffic slowed to an agonizing crawl. 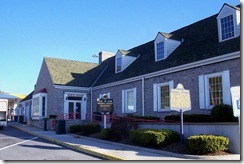 During the 1930s, the proposal for a new cross-state highway emerged within the State Planning Board and as result of the New Deal work relief projects that created jobs for unemployed Pennsylvanians the project took on the possibility of becoming a reality. A four lane highway over this rough terrain was an expensive project, especially during the Depression years, so the Planning Board proposed to use New Deal funding to build it along a long abandoned and only partially completed right-of-way constructed by railroad magnate William Vanderbilt prior to 1885. In 1935, the estimated construction costs were between $60 million to $70 million. Two years later, Governor George Earle signed a bill authorizing the creation of a Turnpike Commission.

When the Pennsylvania Turnpike opened in 1940, it was the first limited access superhighway in the nation. The first part of the Turnpike to open in 1940, was a 160 mile section going through the rugged ridges and narrow valleys in southern central Pennsylvania. If not for the work projects of the New Deal during the depression the Turnpike probably would not have been built until many years later, if at all.

After groundbreaking for the Turnpike on October 27, 1938, an army of more than 15,000 laborers working for 115 contractors and subcontractors from eighteen states constructed the highway's 160 miles, seven tunnels, and 300 structures. After the Pennsylvania Turnpike officially opened on October 1, 1940, nearly 27,000 autos crowded the road on its first weekend. The toll of one cent per mile didn't discourage traffic, and neither did the speed limit: initially, the Turnpike had no posted limit. Of course, if you have traveled the turnpike lately, you get the impression that some drivers still believe that is the case.

During World War II wartime rationing of rubber and gasoline reduced traffic, but the turnpike found a new use transporting military equipment and troops. After the war, pleasure travelers once again flocked to the turnpike, which was soon extended to Valley Forge, then east to New Jersey, and westward to Ohio. The last addition, the Northeast Extension, stretched to Scranton in 1957.

The Pennsylvania Turnpike's construction during the late 1930's served the nation and state in two important ways. Thousands of Pennsylvanians were provided jobs during the rough days of the Depression and served as a blueprint for the national interstate highway system begun after President Dwight D. Eisenhower signed into law the Interstate Highway Act of 1956. More information and photos on the history of the Pennsylvania Turnpike can be found at PA Turnpike and Turnpike History.

Posted by Little Bits of History at 4:02 PM