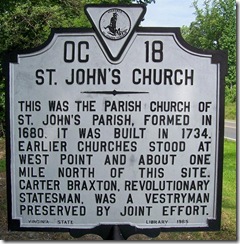 Marker Text: This was the parish church of St. John's Parish, formed in 1680. It was built in 1734. Earlier churches stood at West Point and about one mile north of this site. Carter Braxton, Revolutionary Statesman, was a vestryman. Preserved by joint effort. 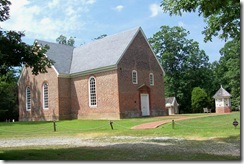 I find all the markers I come across interesting, but among some of my favorite are the markers related to churches. Particularly in Virginia, many of these churches date back to the Colonial period. I enjoy these markers, because the church building itself is often still standing, sharing with us a moment in history of our country. Among these many markers is one in King William County, VA, St. John's Church in the St. John’s Parish formed in 1680. In 1734 there were two original churches with one about a mile from this location and one located in the present Town of West Point. In that same year the two churches were consolidated in a new brick building, the subject of this marker. 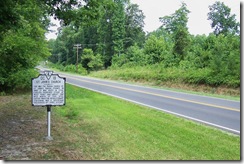 St. John's is located on the colonial road between King William Courthouse and Pamunkey Neck, where the Town of West Point grew up in the mid-nineteenth century. It is approximately 9 miles from West Point and 150 yards west of Virginia State Route 30. 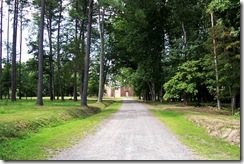 Photo taken looking down road leading to church from Route 30, marker is on right out of frame.

In some sources the date of 1732 has been mentioned as the construction of the church, but it most likely was completed in 1734. Except for the addition and the raising of the floor of the nave approximately twelve inches in later years, St. John's remains basically the same structure today as it did in 1734. The brick is laid in English bond below the water table and in Flemish bond with all glazed headers above the water table.

The parish flourished in the mid-18th century with an active congregation which included Carter Braxton, one of the signers of the Declaration of Independence. Prior to the American Revolution, St. John's was the subject of a sharp rivalry between two members, Carter Braxton and Thomas Claiborne, who were bitter political opponents in King William County. They vied for power in the church as well as in politics. Their disagreement was carried to the House of Burgesses, which ordered the vestry to be dissolved and new members to be chosen. 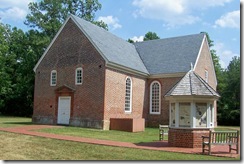 The Claiborne-Braxton disputes seemed to foreshadow the deep divergence that developed in the parish during the struggle with Great Britain. Claiborne became an outspoken Tory, while Braxton took the position in favor of the independence of the colonies. Tory raiders burned Braxton's home in 1780 while he as attending a session of the Continental Congress.

St. John's suffered even more than many other Anglican churches from the effects of the Revolution. It lost many of its members who either went away to war and never returned or who fled the New World. St. John's continued as an Episcopal church at least until 1799 if not longer, but no records of St. John's exact last years as an active Episcopal church have surfaced. Eventually Episcopalians did at some point cease to worship there opening the way for other denominations to occupy the building. For awhile Methodists and Baptists used the building until 1877 when the building and surrounding property went to private hands. 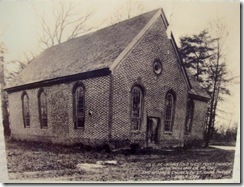 Photo of how the church looked in 1927 before restoration. Photo taken from the cupola structure in front of church which provides historical data and photos.

In the local economic boom period in the late 19th century, a new Episcopal congregation formed in the present Town of West Point. By 1882 a new Episcopal church had been built in West Point again called St. John's and this building was called Old St. John's. Old St. John's was no longer used by any denomination and rapidly began to deteriorate and was almost lost to history. There are photos at the site of the church, which speaks of its history, and shows what the church looked like at its worst with overgrowth and an old ruin lost in the woods. Fortunately, in 1913 the property was deeded back to the church in West Point and in 1926 the St. John's Church Restoration Association was formed. The Association is an interdenominational group with many members from St. John’s in West Point. The Association sponsored reconstruction and restoration of Old St. John’s. Despite decades of neglect the walls and roof were still standing, a testament to the quality of craftsmanship of its original masons and carpenters. Over the years the building was been restored to its current condition. In 1973, the church was designated a state and national landmark. 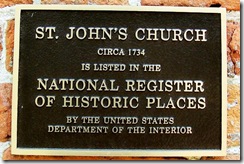 Additional history and photos can be found at the Old St. John's web site.  Annually, on the fourth Sunday in September, the Association holds a homecoming worship service at the colonial church, followed by lunch on the grounds. Old St. John’s is also available for services, weddings, meetings and special events, subject to approval by St. John’s clergy and the St. John’s Restoration Association.

Posted by Little Bits of History at 12:08 PM