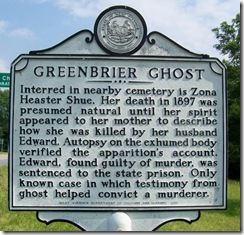 Marker Text: Interred in nearby cemetery is Zona Heaster Shue. Her death in 1897 was presumed natural until her spirit appeared to her mother to describe how she was killed by her husband Edward. Autopsy on the exhumed body verified the apparition's account. Edward, found guilty of murder, was sentenced to the state prison. Only known case in which testimony from ghost helped convict a murderer.

Location: On U.S. Route 60 (eastbound) at junction with Interstate 64, exit 156 just outside Sam Black Church.  Erected by the West Virginia Department of Culture and History in 1981. 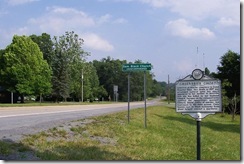 Photo taken looking east on U.S. Route 60 just off the exit at Interstate 64. (click on any photo to enlarge)

Historical road markers cover a wide range of people, places, things and events and some are quite unusual, like this marker I came across off Interstate 64 in West Virginia. As the marker states it tells of probably the only trial where the testimony of a ghost helped to convict a murderer.

The story begins with a couple, Zona Heaster Shue and her husband, Edward S. Shue. Edward S. Shue was convicted of murder where the murder victim, his wife, came back from the grave to testify through her mother against the murderer.

On the day of the murder a neighbor boy went to the Shue home where he found Zona on the floor with a trail of blood leading from her body out to the porch. When the husband was told of the situation Edward Shue appeared in great anguish running to his home and and directed Dr. Knapp be called. All during this time Shue held his wife's head in his arms. A behavior he continued throughout the time until her burial. After a brief examination Dr. Knapp gave the cause of death as heart failure. Zona was buried in a cemetery near this marker. I did not have the time to find the cemetery and her grave.

Zona's mother was a very religious person and felt that something was amiss in the death of Zona. She prayed constantly for a revelation to help her undestand. One night as she prayed Zona appeared in the room with her and she reached out to touch her daughter who then vanished. After subsequent visits to the mother, Zona's ghost explained to her mother that her husband grasped her by the throat squeezing it, breaking the first joint in her neck. Zona described things about the house which the mother had never visited and also something that she had placed inside the door in the cellar. Mrs. Mary Heaster began to tell the neighbors of her daughter appearing and talking to her. Of course, many thought the woman was out of her mind, but Mary Heaster's sincerity began to have it's effect and people began to believe her. 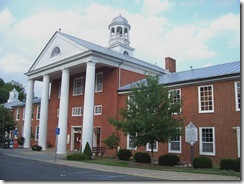 Mary's brother-in-law went to the county prosecutor and told the story. The prosecutor questioned Mary for several hours and decided to at least investigate the death further. Dr. Knapp was consulted and he agreed that he might have been mistaken in his cause of death. An investigation revealed that Edward Shue had served a term in the penitentiary and had been married twice previously and the wives had died under strange circumstances.

Prosecutor Preston decided that the body of Zona Shue be exhumed and an autopsy performed. Dr. Knapp discovered that Zona's neck had a broken vertebrae as described by Zona when she appeared to her mother. On this evidence, Edward Shue was arrested and jailed in Lewisburg, WV and went on trial in Greenbrier County. He was convicted of first degree murder and sentenced to life in prison, where he died in 1905.

This may not be the most strange and unusual historical marker, but probably is close. You can find a more detailed description of the story behind this marker by visiting the West Virginia Historical Archives called “Can the Dead Return From the Grave?”

Posted by Little Bits of History at 12:16 PM