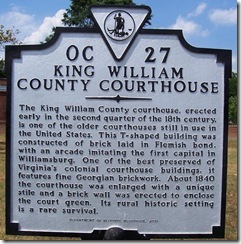 Marker Text: The King William County courthouse, erected early in the second quarter of the 18th century, is one of the older courthouses still in use in the United States. This T-shaped building was constructed of brick laid in Flemish bond, with an arcade imitating the first capital in Williamsburg. One of the best preserved of Virginia's colonial courthouse buildings, it features fine Georgian brickwork. About 1840 the courthouse was enlarged with a unique stile and a brick wall was erected to enclose the court green. Its rural historic setting is a rare survival. 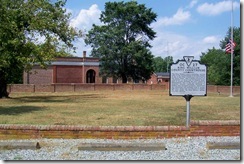 Location: On Route 1301 (Courthouse Road), just off Virginia Route 30 to the north, east of the intersection with Route 619 (Horse Landing Road) about 17 miles northwest of West Point, VA. Erected by the Department of Historic Resources in 2001.

I have always been fascinated by all the old buildings in Virginia, particularly those dating back prior to the American Revolution. Many of these buildings have historical markers connected to them. In eastern Virginia there are several old courthouse buildings. According to what I learned only three are still in use as courthouses and one mentioned in this marker is in King William County just off Virginia Route 30. The other two are in Charles City and Hanover Counties. There are others that are old courthouse buildings, but are no longer used by the courts. 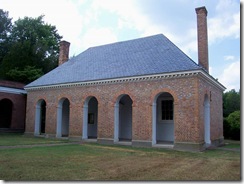 King William County Courthouse was built about 1725. The land was donated by Richard Littlepage and Henry Fox in 1702. The one-room, T-shaped, hipped-roof structure likely replaced the original wooden frame courthouse structure. The historic building is not only the county's oldest public building, but is purportedly the oldest public building in use in Virginia and the oldest courthouse of English foundation in continuous use in the United States. Even though a new courthouse designed to modern court facility standards has been built on the tract of county property located adjacent to the historic courthouse on Courthouse Lane. The judges of the local courts will periodically perform some judicial functions in the historic courthouse so as to maintain the building's historic "continuous use" traditions. 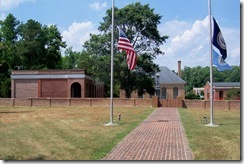 The 1725 courthouse was constructed of brick laid in Flemish bond with an arcade or a piazza imitating the first colonial capital in Williamsburg. The building is considered one of the finest examples of early colonial brickwork and courthouse design. The Virginia Department of Historic Resources, which maintains the Virginia Landmarks Register, considers the courthouse to be the best preserved of Virginia's eleven colonial era court buildings. 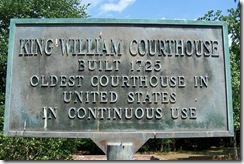 In 1840 the courthouse was enlarged and a brick wall was erected to enclose the court green and to keep livestock and poultry away from the buildings. It is one of the few remaining enclosed court greens in Virginia. The interior of the courthouse was extensively renovated about 1926 and again in 1983-84, the latter an effort to restore the building to more of its original 18th century appearance. The most outstanding feature of the courthouse is its brickwork, cited by architects as one of the finest surviving examples of colonial art, according to the book "Old Virginia Houses, The Northern Peninsulas." 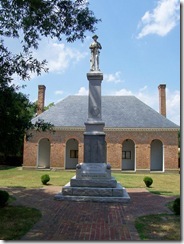 An interesting fact about King William County is that their total population has not quite doubled since the first U.S. Census in 1790 from 8,123 to a 2010 estimate of 16,003. The rural character and the slow growth of the area around the courthouse, probably has contributed to the survival of this building in much the similar fashion it would have looked 285 years ago. The King William County web site has additional history and information.

Posted by Little Bits of History at 10:33 AM