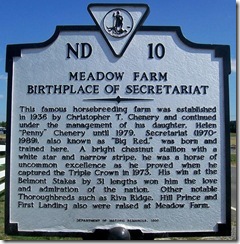 Marker Text: This famous horsebreeding farm was established in 1936 by Christopher T. Chenery and continued under the management of his daughter, Helen "Penny" Chenery until 1979. Secretariat (1970-1989), also known as "Big Red," was born and trained here. A bright chestnut stallion with a white star and narrow stripe, he was a horse of uncommon excellence as he proved when he captured the Triple Crown in 1973. His win at the Belmont Stakes by 31 lengths won him the love and admiration of the nation. Other notable Thoroughbreds such as Riva Ridge, Hill Prince and First Landing also were raised at Meadow Farm.

Location: On Dawn Boulevard (Virginia Route 30) at Route 652, 1.8 miles east of Interstate 95 and 0.4 miles east of Caroline/Hanover County line. Erected by the Department of Historic Resources in 1990. 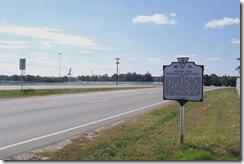 Virginia has numerous horse farms and stables throughout the country side, but I ran across this marker one day on my way to Williamsburg. With the recent release of the movie “Secretariat” listing this marker seemed appropriate. I did not know that the famous Triple Crown Champion  “Secretariat” had been born in Virginia. This marker is easy to locate, it is only about one and half miles east of Kings Dominion Amusement Park on Virginia Route 30 in front of the Meadow Farm. The farm is being transitioned into The Meadow Event Park with plans to restore the foaling shed and other stall barns used by Secretariat and later adding a Museum of the Virginia Horse with a display on The Meadow’s equestrian history.

Becoming a Triple Crown champion consists of winning three races for three year old’s at the Kentucky Derby, The Preakness Stakes and Belmont Stakes. Secretariat became the ninth Triple Crown winner in history, and the first in 25 years in 1973. You can find a complete history of the life of Secretariat at the official web site.  I had discovered shortly after taking this photo that Disney productions had just filmed some segments of the new movie at this location about two months earlier. The web site for the film is Secretariat. 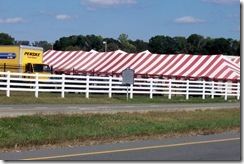 I remember all the excitement that surrounded Secretariat's races in 1973 and whether Secretariat would become the next Triple Crown champion. As Secretariat prepared for the Belmont Stakes, his photo appeared on the covers of three national magazines: Time Magazine, Newsweek, and Sports Illustrated. He had become a national celebrity.

Apart from Secretariat's success on the race track his life took shape as a very successful stud in the remaining years. Ultimately, he sired as many as 600 foals during his retirement. As part of his first crop at stud, Secretariat sired Canadian Bound, who was the first Thoroughbred yearling racehorse ever sold for more than $1 million. At the 1976 Keeneland July sale, the auction bidding for Canadian Bound not only broke the $1 million barrier, but the colt ended up being sold for $1.5 million.

Secretariat was later syndicated by Seth Hancock in Bourbon County, Paris, Kentucky for breeding purposes and stood at stud at Claiborne Farm at the conclusion of his racing career at the end of 1973 until his death in 1989, where Secretariat was buried.

Posted by Little Bits of History at 11:34 AM