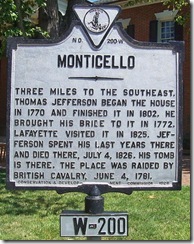 Marker Text: Three miles to the southeast. Thomas Jefferson began the house in 1770 and finished it in 1802. He brought his bride to it in 1772. Lafayette visited it in 1825. Jefferson spent his last years there and died there, July 4, 1826. His tomb is there. The place was raided by British cavalry, June 4, 1781

Location: At the corner of E. Jefferson and Park Streets, in front of the Albemarle Co. Courthouse in Charlottesville, VA. Erected by the Conservation & Development Commission in 1928.

"I am as happy no where else and in no other society, and all my wishes end, where I hope my days will end, at Monticello. Too many scenes of happiness mingle themselves with all the recollections of my native woods and fields, to suffer them to be supplanted in my affection by any other." (In a Jefferson letter to George Gilmer, August 12, 1787 and this quote appears inside the terminal of the Charlottesville-Albemarle Airport.) 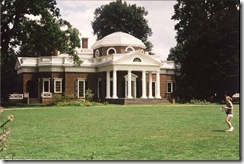 The marker about Monticello not only interprets the home of Thomas Jefferson it is a prime example of one of the earlier Virginia State Historic markers. This marker was erected in 1928. Historic road markers began to appear in Virginia in 1927, after William E. Carson, the first chairman (1926-34) of the Virginia Conservation Commission helped to establish the state system of historical markers. Many earlier markers do exist in the state, some of which I will cover in future postings. Though these older markers are beginning to disappear as they are replaced with newer markers with revised or expanded text. 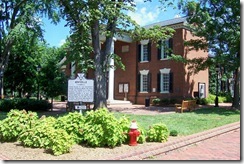 Many markers are replaced because they have been damaged or destroyed over the years or new and revised historical information is available. This marker is in very good shape probably due to being located on the grounds of the courthouse away from major dangers facing markers located on major roads. The markers not only tell us about our history, but are becoming themselves apart of our historical landscape. It was logical that one of the earliest historical markers would be designated for Monticello. This marker is not located at Monticello, but in front of the Albermarle County Courthouse in Charlottesville. On some days you can see Monticello standing near this marker. To see a photo of Monticello from near the marker visit this Monticello marker site. 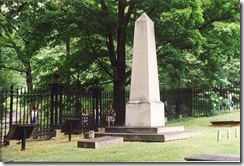 The main house that exists today is for the most part the same house that Thomas Jefferson lived in during his retirement with the family of his surviving daughter, Martha Jefferson Randolph. The house is an example of Roman neoclassicism with influences from contemporary French architecture. Enlarged by 1809, the house itself has twenty-one rooms and is 100' long, 87'9" wide and 44'7" high (to oculus of dome). Often viewed as extensions of the main house, the two L-shaped, terraced wings contained further living and support spaces where some of the essential domestic work of the plantation was done. 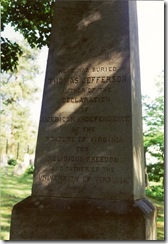 A visit to Monticello is a must if you plan to travel through Charlottesville, VA. Monticello is full of rich history not just about the third President of the United States, but so much more. Monticello is a walk through history. You discover yourself visiting the same home visited by explorers Meriwether Lewis and William Clark and France General Marquis de Lafayette. Or you can imagine the arrival of Jack Jouett who rode all night on June 4, 1781 from Cuckoo Tavern in Cuckoo, VA. Jouett was giving a warning to Thomas Jefferson and other state legislators now meeting in Charlottesville, that the British Lt. Col. Banastre Tarleton and his troops were on their way to attempt the capture of the Virginia State Legislators. You can imagine Thomas Jefferson escaping Monticello only minutes before the British arrived. You can also join other notable visitors like, future Presidents James Madison and James Monroe calling on Jefferson among many other notable individuals of the day. 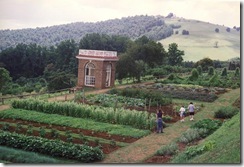 Jefferson's home is also a view of a man of varied interests. You will discover Jefferson's interests in architecture, agriculture, exploration, education and many other topics you may find amazing. Of course, the Jefferson's family cemetery is on the grounds with Jefferson's burial site.

What can be discovered about Thomas Jefferson at Monticello is ample and limitless. What little fact that fascinated me was that Thomas Jefferson died at Monticello on July 4, 1826 on the same day as John Adams of Massachusetts, both signers of the Declaration of Independence and former presidents, exactly fifty years after the signing of the Declaration. 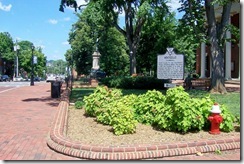 Thomas Jefferson Monticello web site contains a wealth of information about Monticello and answers about every question you might have about Monticello. It has a virtual tour of the house with many photos. The web site has videos, blogs, educational materials for parents and teachers, you can ask questions and get expect answers to your questions from the Monticello staff. An excellent resource for understanding Monticello, of course, there is nothing better than to visit Monticello and take the tour, it is well worth the time to plan a visit. Plan for several hours and taking tons of photos, there is an abundance to see and do. I have been there twice so far.

Posted by Little Bits of History at 10:34 AM