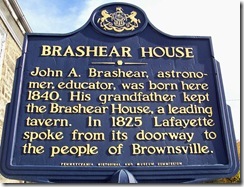 Marker Text: John A. Brashear, astronomer, educator, was born here 1840. His grandfather kept the Brashear House, a leading tavern. In 1825 Lafayette spoke from its doorway to the people of Brownsville.

Location: At the corner of 6th and Union Streets (on old U.S. Route 40), Brownsville, PA.  Erected by the Pennsylvania Historical and Museum Commission in 1946.

"We have loved the stars too fondly
to be fearful of the night." 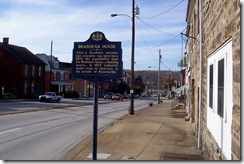 On a warm night I like to sit on my back deck and look at the night sky and watch the stars and the large planes flying to and from Dulles Airport. Last night was unusually warm for February and there was a full moon with a clear sky. While looking at the stars, I thought of the above saying and this marker. These words are written on a plaque at the Allegheny Observatory in Pittsburgh, PA below the Keeler Telescope where the interred ashes of John Brashear and his wife are located. The words are a paraphrase of the last line of the poem by Sarah Williams, “The Old Astronomer to His Pupil.”

John Brashear was born in 1840 at this stone tavern (in the third photo) at Sixth and Market Streets in Brownsville, Pennsylvania. When John Brashear was nine, his grandfather took him to gaze at Saturn through the lens of a traveling telescope exhibit. After that experience, Brashear pursued a life long passion to read and assimilate every science and astronomy text he could locate. 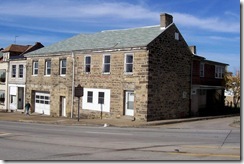 At the age of twenty he was employed as a machinist in a rolling mill in Pittsburgh. After work, Brashear and his wife Phoebe built a new house on the South Side with their own hands and studied astronomy. They would star-gaze on Saturday nights when the mills put out less pollution to obscure the sky. Soon they decided to build a telescope of their own. John made the tools they needed to work the optical glass they had ordered from New York. Phoebe's special skill was in patiently "fining," or polishing, the glass.

Seven hundred nights later, they had precisely finished an exquisite five-inch refractive lens. When John removed it from the lathe, he was so excited that he dropped the lens. "It broke in two pieces," he wrote in his autobiography. "It broke my heart, as well as my wife's, in a good many hundred pieces!" The Brashears then spent the next three years working on another five-inch lens. When finished, they mounted it in a nine-foot tube, cut a hole in the roof of their house and invited their neighbors to view the night sky.

The Brashears showed their work to Samuel Langley at the Allegheny Observatory, who encouraged them to make something more complicated: a twelve-inch reflecting lens. After months of work, they had two samples completed. As they were silvering the first lens, it cracked. The second lens was soon silvered with a process John invented. This technique, "Brashear's process" revolutionized the finishing of lenses and became the industry standard until 1933. Brashear published it freely, refusing to patent it for his own profit.

Small plaque over the garage door indicating the house was built in 1798 as Redstone Old Fort.

The Brashears advertised in the Scientific American, offering custom made "silvered glass specular, diagonals and eye-pieces" for people who wanted to construct their own telescopes. They brought had so much business in the next three years that John had to quit his mill job, in order to avoid ruining his health. With a grant from Langley he could now make a living manufacturing lenses.

In 1881, Brashear had a chance meeting with Pittsburgh industrialist William Thaw while delivering a lens to Langley at the Observatory. Three days later, Thaw offered the Brashears $3,000 to build a large workshop more suited to their needs. According to Brashear, their only obligation would be "if I ever became wealthy, I could either return it to him or pass it on to another fellow!" In 1886, Thaw built Brashear another, larger, workshop near the Allegheny Observatory.

The Brashear Company soon became known worldwide for its silvering and fine lenses, producing state-of-the-art spectroscopes and equipment for optical experiments and observatories in North America, Europe, and Africa.

Brashear taught astronomy at Western University of Pennsylvania (now University of Pittsburgh) and was Acting Chancellor from 1901 to 1904. A founding director of Carnegie Institute of Technology (now Carnegie-Mellon University), he also became Director of the Allegheny Observatory. 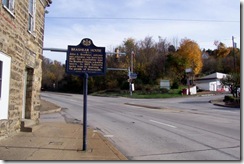 True to their words, he and Phoebe made a vocation of giving back to their local community. The Brashears donated telescopes to the public school system. With his love of people, particularly children, most Pittsburghers knew him as "Uncle John." "Uncle John" Brashear donated countless hours playing with the children at the Western Pennsylvania School for the Blind. He regularly visited inmates at the Western Penitentiary, teaching them astronomy. Together, Brashear and the inmates constructed fourteen telescopes.

After Phoebe died in 1910, Brashear worked on his autobiography. He died at the age of seventy-nine, in 1920. The Brashear Company operated until 1974, when a Swiss company bought it. Still located near Pittsburgh, Brashear L.P. makes optical equipment for military use.

The Brashear House marker also mentions the visit of the Marquis de Lafayette of France during his 1825 visit to the U.S. Lafayette spoke to the people of Brownsville from the doorway of the Brashear House during this visit. I have other markers about Lafayette during the American Revolution and his 1825 U.S. visit and will give background on him when covering those markers.

Posted by Little Bits of History at 9:00 AM