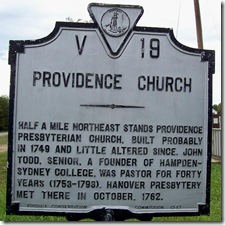 Marker Text: Half a mile northeast stands Providence Presbyterian church, built probably in 1749 and little altered since. John Todd, Senior, a founder of Hampden-Sydney College, was pastor for forty years (1753-1793). Hanover Presbytery met there in October, 1762.

Location: On Broad Street, Route 250, 0.4 miles northwest of Gum Spring, VA and the intersection with VA Route 522, on the right when traveling west. Marker is about 0.3 miles from the church which located at 3388 Three Chopt Road. Erected by the Virginia Conservation Commission in 1947. 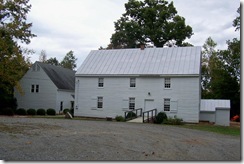 My last post concerned a Lutheran log church in Pennsylvania, so today I thought I would post a Presbyterian church in Virginia, which is a rare example of a 18th century wood frame church. This simple structure stands amid oak and pine, much as it did 250 years ago when Indians roamed the Virginia forests and a group of Presbyterians met to read and study the Bible.

Providence Presbyterian Church is in Louisa County within the bounds of the Presbytery of the James just a short distance from Interstate 64. The church's building is the oldest Presbyterian Church in continual use in Virginia. The only remaining example of the seven “Meeting Houses” built by dissenters of Hanover and Louisa when the Church of England was the established church. In the early 1740′s, Samuel Morris invited a group of people to read the Bible and worship in his home. As their numbers grew, Morris began to build “Meeting Houses,” for Bible study. Upon hearing of his work, Governor Gooch of Virginia called Morris to Williamsburg to defend his actions, since his work was outside the established Church of England. Morris and other dissenters declared themselves "Presbyterians." Governor Gooch granted them permission to worship in this denomination under the "Act of Toleration". 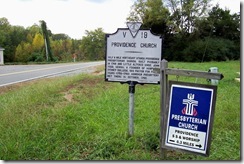 Photo of the marker is taken looking west on Route 250.

Samuel Davies arrived in 1747 to minister to this group of Christians in the seven Meeting Houses. Davies had a profound impact on the move for religious freedom in Virginia despite his being a man of general poor health. Patrick Henry was greatly influenced by Davies’ skill as an orator. During his years in Virginia, Davies taught slaves to read and sent missionaries to the Indians. Davies only preached at Providence Presbyterian Church until 1752, when the Presbytery sent John Todd to take over some of Davies preaching responsibilities. Davies remained in Virginia until 1759, when he was asked to take over the Presidency of the College of New Jersey, which would eventually become Princeton University. 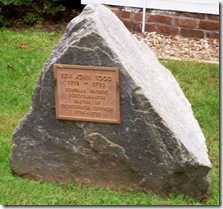 Photo of memorial marker to John Todd in front of the church.

John Todd became Providence Church’s first pastor in 1752 and he remained in this position for 41 years, serving until his death in 1793. While pastor, he helped established one of the first classical schools which eventually become Hampden-Sydney College. Rev. John Todd was a supporter of the American Revolution and served as the chaplain of the Louisa Militia. During Mr. Todd’s ministry to Providence the famous evangelist, George Whitefield, preached from the Church’s pulpit. 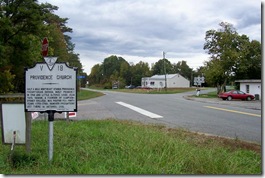 Photo of the marker on Route 250, looking east.

Rev. Todd’s ministry marked the beginning of a long and often difficult history of Providence as a Presbyterian church. It is recorded that the congregation was nearly decimated by the Civil War, but was kept alive by one or two men and a few women. Over the years the size of the congregation varied little, usually hovering around forty members. Beginning in 1947, the “Old Providence Rural Parish” was formed linking four churches under a resident pastor. This model of ministry was valuable in helping to continue church life for many years.

The construction of Interstate 64 brought changes to this rural area around Gum Spring. Families were attracted by living in a rural setting and while commuting to Richmond for employment. As a result, Providence begun to grow and discovered new opportunities for ministry. In 1986, an educational building was erected and enlarged.

Posted by Little Bits of History at 2:11 PM