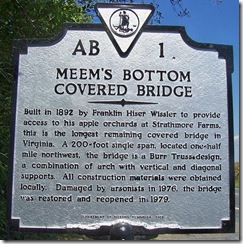 Marker Text: Built in 1892 by Franklin Hiser Wissler to provide access to his apple orchards at Strathmore Farms, this is the longest remaining covered bridge in Virginia. A 200-foot single span located one-half mile northwest, the bridge is a Burr Truss design, a combination of arch with vertical and diagonal supports. All construction materials were obtained locally. Damaged by arsonists in 1976, the bridge was restored and reopened in 1979. 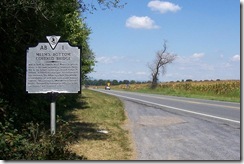 When you come across a marker which tells us about an historical bridge, that bridge is often about a covered bridge. The Meem's Bottom Covered Bridge is the longest timber covered bridge remaining in Virginia and the only one bearing vehicular traffic on the state system.

This particular covered bridge is 204 feet long, single-span Burr arch truss located south of Mount Jackson and north of New Market. The Meem's Bottom Covered Bridge was constructed approximately in 1892-94 from materials cut and quarried nearby for the massive arch supports and stone abutments, which extended 10 feet below the riverbed. The bridge spans the North Fork of the Shenandoah River and has carried traffic for more than 100 years. On October 28, 1976, the bridge was burned by vandals. After salvaging the original timbers, the bridge was reconstructed and eventually undergirded with steel beams and concrete piers. The bridge was reopened to traffic in 1979 and is still in operation today. 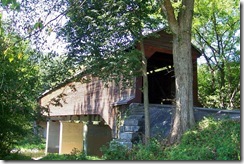 As in many historical events, legends often develop around people and places rather than facts and the Meem’s Bottom Covered Bridge is no exception. Some stories state that the first bridge on this site was burned by General Stonewall Jackson ahead of the Union Forces in 1862. The earlier bridge at this site was not Jackson's objective. The one he ordered burned was two miles down stream of the Shenandoah North Fork on the Valley Pike (U.S. Route 11) one mile southwest of Mt. Jackson where the Iron Bridge is today. The second bridge on this site was destroyed by the great flood of 1870 which reportedly washed away all the bridges that crossed the Shenandoah River. 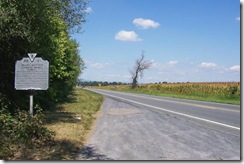 Photo taken looking north on Route 11, road leading to the bridge is ahead on the left.

Franklin Hiser Wissler gained ownership of the Strathmore Farms and he had the bridge built to eliminate several miles of accessing his properties in a roundabout manner. He owned iron furnaces in Liberty and Columbia and was the first farmer to harvest apples commercially in Shenandoah County.

He probably engaged John W. B. Woods, a master bridge builder to construct the bridge on private property. The design selected was a burr arch-truss of 182’-10” clear span between abutment faces with 10’-4” extended over the abutment wingwalls making a total length of 203’-6”. It is 19’-2” wide.

The bridge stayed in the Wissler family until the late 1920’s. It was then deeded to the county in exchange for maintenance. In 1932 the Virginia Department of Highways (as the Department was known at that time) acquired the bridge from the county and continued to maintain it in good repair. 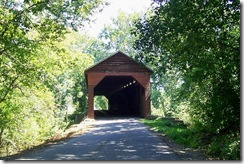 After the bridge was seriously damaged due to vandals in 1976, local officials and historic organizations pressed vigorously to have the bridge restored rather than be replaced with a modern concrete structure. The General Assembly of Virginia directed the Virginia Department of Transportation to rebuild and restore the bridge in such a manner as to maintain its historical significance.

The renovation project cost was $240,000, the first covered bridge built with Virginia Department of Highways funds. This was in the fall of 1979. It was restored as a single span burr arch-truss with a posted capacity lowered to 8 tons. It no longer looked like the original on the outside, but it still looks like the original on the inside. The bridge is recorded with the Virginia Historic Landmarks Commission and the National Register of Historic Places in 1975. Additional photos of bridge, particularly the inside wooden structure can be found at Historical Markers Database.

Posted by Little Bits of History at 11:49 AM