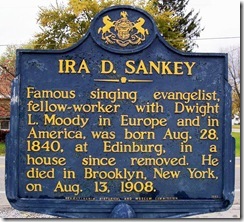 Marker Text: Famous singing evangelist, fellow-worker with Dwight L. Moody in Europe and America, was born Aug. 28, 1840, at Edinburg, in a house since removed. He died in Brooklyn, New York, on Aug. 13, 1908.

Location: On PA Route 551 in front of the post office, Edinburg, PA. Erected by the Pennsylvania Historical and Museum Commission in 1948.

Ira David Sankey is a name quite well known in New Castle, PA. His name is connected to several organizations and his name appears on the youth center for the City Rescue Mission. Sankey was an American gospel singer and composer, associated with evangelist Dwight L. Moody. Ira D. Sankey was born on August 28, 1840 in Edinburg which is a community west of New Castle in Lawrence County where this marker is located.

When Sankey was 16, he was converted at a revival meeting at the King's Chapel United Methodist Church, which was about three miles away from his home.  Sankey was 20 years old at the outbreak of the Civil War and signed up to serve. After the Civil War, he joined his father working for the IRS, his father had been appointed by Abraham Lincoln a collector of internal revenue. Sankey also worked for the YMCA and traveled as a singer of sacred songs. He was in constant demand at all kinds of religious gatherings. He became increasingly well known as a Gospel singer, and eventually attracted the attention of noted evangelist Dwight L. Moody. 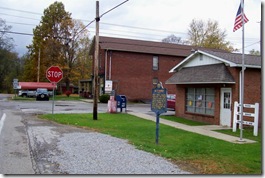 The marker is located in front of the Edinburg Post Office.

Sankey was sent as a delegate from New Castle, PA, to the international convention of the Young Men's Christian Association, which met at Indianapolis in 1870. During this meeting he met Dwight L. Moody, a delegate from Chicago, who, on hearing Mr. Sankey sing, at once invited him to come to Chicago and assist him in his evangelical work. After deliberating for six months, he decided to accept. He resigned his IRS position and joined Mr. Moody in Chicago.

In October 1871, Sankey and Moody were in the middle of a revival meeting when the Great Chicago Fire broke out. The two men barely escaped the confusion and danger of the fire that brought their two lives together. Sankey ended up watching Chicago burn from a rowboat far out on Lake Michigan. 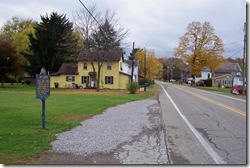 Marker is shown looking west on Route 551 in Edinburg.

On June 7, 1872, Sankey and Moody made the first of several joint visits to the United Kingdom. Sankey's hymns were promoted by the famous London Baptist preacher, Charles Spurgeon. Following Moody and Sankey's visit to England which concluded in June, 1873, Sankey's singing gained him an international reputation. He made a deep impression throughout Great Britain, so that by the time he returned to America the names of "Moody and Sankey" had become household words throughout Europe.

Sankey helped popularize the use of hymns with lyrics written by contemporary composers and musical instruments in church worship services. Sankey seldom wrote poetry as did Fanny Crosby and P. P. Bliss. However, he did compose music and provide the tunes for some of the great hymns written during those days. Some of Sankey's most beloved hymns were poems he set to music, such as The Ninety and Nine, Trusting Jesus, A Shelter in the Time of Storm, and I Am Praying for You. Other tunes written by the musician include Am I a Soldier of the Cross, Sleep On Beloved, Why Not Tonight?, and I Will Trust Thee.

Sankey was good friends with hymn writer, Fanny Crosby and wrote music for many of the song lyrics she composed. Sankey composed music for over 1,200 hymns during his life. Sankey was also the author of many popular hymnals and song books.

This work is licensed under a Creative Commons Attribution No Derivatives license.
Posted by Little Bits of History at 5:26 PM