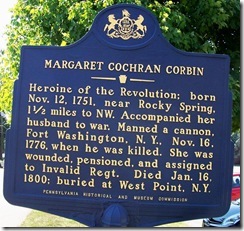 Location: On U.S. Route 11 near Roand Ave., 1.5 miles North of Chambersburg, PA. Erected by the Pennsylvania Historical and Museum Commission in 1961.

Several years ago when I started to make a point of stopping and reading historical road markers, I was often amazed by the discovery of history contained within these markers that seemed so unnoticed by the rest of the world driving past each day. I came across this marker about Margaret Cochran Corbin one day in Chambersburg, PA while I was looking for some other markers and was pleasantly surprised by what I discovered about this woman of the American Revolutionary period.

Margaret was born on November 12, 1751 near Chambersburg, PA about 1½ miles from this marker. In 1756, her Father was killed and her Mother was taken captive during an Indian raid. Margaret and her brother escaped the fate of her parents while they were visiting their Uncle who had adopted and raised them. In 1772, Margaret married John Corbin a Virginia farmer. Three years later John enlisted in the First Company of the Pennsylvania Artillery under the command of Captain Thomas Proctor. Margaret refusing to be left behind at home rolled up her belongings in a blanket and followed her husband. From sources I read this was not an uncommon situation. Many wives became camp followers and they would cook, wash laundry, nurse wounded soldiers and lived with the problems common in military camp life. 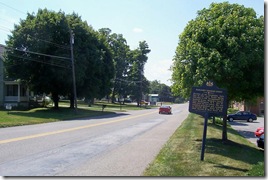 Margaret was given the nickname Captain Molly as was the title for other wives who were camp followers and shared similar duties. She was occasionally confused with Molly Pitcher (Mary Ludwig Hays) who was at the Battle of Monmouth in 1778.

Her husband, John's Company had been ordered to New York to see action. On November 16, 1776 the British and Hessians mounted a joint attack on Fort Washington in northern Manhattan. Captain Pierce commanded the Forest Hill (Fort Tryon) fortifications and ordered Corbin's artillery to hold off the attacking Hessians with what few cannons they had. During the four hour battle every hand was needed to man the cannon and muskets. Margaret helped in the laborious work of helping out where needed. Men were falling dead around them when John was killed instantly by a Hessian musket ball.

Margaret stepped into John's place by cleaning, loading and firing the cannon with such skill and vigor that she caught the attention of the officers and men of Cochran's company as one of the deadliest gunners who opposed the Hessians as they approached the hill. Because of her aim and accuracy Margaret's position drew the attention of the ten field cannons of the Hessians. This event had given her the recognition as the first woman soldier in the American Army. The last American cannon which was silenced was Margaret's. Margaret was severely wounded with three musket balls and grapeshot. Her left arm was almost severed by these wounds, her chest had been mangled and her jaw was badly lacerated. The enemy had advanced to the American ramparts. As the defenders were driven back the dead and dying were left behind and were examined by doctors of the British and Hessian victors. To their surprise Margaret was found alive and her being there had excited some interest because she was the only woman there. 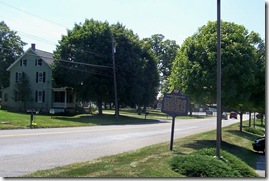 After some surgical care Margaret and other wounded soldiers were paroled and ferried across the Hudson to Fort Lee, New Jersey where she was transported to an army hospital in Philadelphia. Margaret never fully recovered from her wounds and was unable to use her left arm for the rest of her life.

Margaret received a lifetime disability pension of one-half pay on July 6, 1779 from the Continental Congress making her the first woman to obtain such a commitment from the government. She had also received a suit of clothes and entered the Invalid Regiment at West Point.

In 1800 Margaret died just prior to her birthday and was buried in the highlands above the Hudson River. Her grave had a crude stone marker. Her life and death would have disappeared into the history and stories of the American Revolution if not for the stories that were handed down by local villagers. The New York State Society of the Daughters of the American Revolution verified Margaret's records that recognized her heroism and service to the United States in 1926 at the West point Archives and through the papers of General Henry Knox. The overgrown grave was found with the help of a retired riverboat captain who claimed that his grandfather helped with the burial in 1800.

Posted by Little Bits of History at 12:45 PM