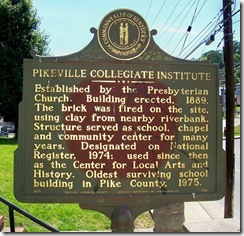 Marker Text: Established by the Presbyterian Church. Building erected, 1889. The brick was fired on the site, using clay from nearby riverbank. Structure served as school, chapel, and community center for many years. Designated on National Register, 1974; used since then as the Center for Local Arts and History. Oldest surviving school building in Pike County, 1975.

Location: At 118 College Street at Kilgore Lane, Pikeville, KY. In front of the Pikeville City Hall. Erected by the Kentucky Historical Society and the Department of Transportation in 1975.

Many U.S. colleges had their beginnings during the 19th and early 20th century. As the U.S. expanded over a wider territory, many individuals became concerned about education in isolated areas, such as, the Appalachian mountains. Many different Christian denominations were concerned about the education of the children. During this period Presbyterian pastors were instrumental in starting different schools throughout the U.S. with the generous donations of other Presbyterians who supported these expressions of ministry in education. The historical marker about the “Pikeville Collegiate Institute” or also called “Pikeville College Institute or Academy” in Pikeville, KY tells the story of these efforts, which lead to the development of Pikeville College. 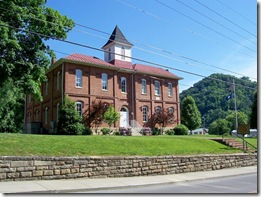 In 1887, Presbyterian ministers, Dr. W.C. Condit of Ashland, KY and Dr. Samuel B. Alderson of Maysville come to southeastern Kentucky. They rode on horse back exploring the Appalachian Mountain area because members of the Edenezer Presbytery (of the Presbyterian Church, U.S.A.) were concerned that the people of the region were being neglected both in educational and spiritual development. Many Kentucky mountain people were of Scot-Irish descent and were men and women of unabounded love of freedom and great national pride. They were welcomed into the homes of these pastors and after many and searching trips they were encouraged to establish a Christian school. After being joined by Dr. James P. Hendricks of Flemingsburg, they decided that the natural center of the region was Pikeville, then a village of about 300 people. In the words of Dr. W.C. Condit, he came to “select the location for an institution of higher learning for the youth of the mountains.”

September 16, 1889, was the first day of class at Pikeville College Institute, a four-room, brick building situated on three acres of land in Pikeville, Kentucky. It functioned as both school and church. The institute was not originally intended to confer degrees, but to give “good practical education to those persons who pursue its courses.” At that time, the institute offered schoolwork in primary, preparatory and “college” departments.

The school opened under the name of Pikeville College Institute with the Rev. David Blyth as principal and also pastor of the Pikeville Presbyterian Church. Rev. Blyth served for three years and with much energy he helped establish the school in its first years as the best school of its grade in eastern Kentucky. Unfortunately, Rev. Blyth service was cut short due to a severe attack of typhoid fever left him unable to continue.

In 1909 the school was split into the Pikeville College Academy, which was a private school at the primary and secondary level, and Pikeville College, which was accredited as a junior college, offering the first two-years with an anticipation of students then transferring to another Presbyterian college for a degree. In 1955 the school became a degree granting four-year college in its own right, and in 1957 the academy closed.

In 1997, Pikeville College School of Osteopathic Medicine was established. This makes the college one of the smallest colleges in the United States to have a medical school.

The motto of Pikeville College is “Prospiciam ad Montes” or “Look to the Mountains.” In the early days those first individuals dreamed about what could be done in these mountains. What began as only a dream has endured for more than a century emerging as a leader in central Appalachia education. The “Pikeville Collegiate Institute” remains as a reminder of the legacy established by those early individuals who knew they were about to further education without knowing where it would eventually lead the community.

Posted by Little Bits of History at 12:05 PM