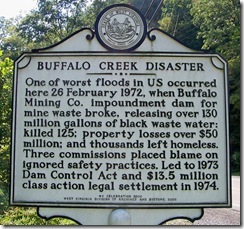 This year is the 39th anniversary of the Buffalo Creek Disaster in Logan County, WV which occurred on February 26th. I was in college when this disaster happened and I remember hearing the news accounts on television. At the time I was completely unaware of where Logan County, WV was or any knowledge of the terrain where this disaster occurred. Thirty years later I lived in Logan County for several years and heard stories of this disaster from residents. Interestingly, I meet individuals who had lost spouses, family and friends in this disaster and I did not know it, until someone else told me. The affected individuals seldom discussed the impact this disaster had on their lives. I came across this video about the Buffalo Creek disaster which shows how the hollow looks today set to music about the impact of the disaster. 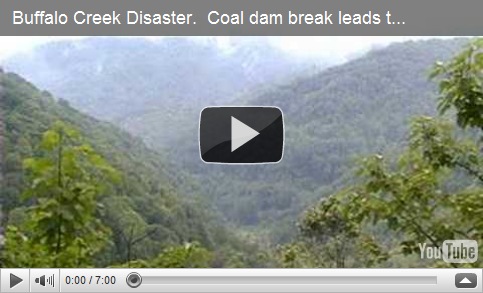 Seven Minute Video with Song and Photos about the Buffalo Creek Disaster.

The Buffalo Creek Disaster was one of the deadliest floods in U.S. History. Careless strip mining and heavy rain produced a raging flood that sweep through the southern West Virginia's Buffalo Creek hollow, when a coal slurry impoundment dam #3 on a hillside at the end of the Buffalo Creek hollow operated by the Pittston Coal Company burst. In a matter of minutes, 118 were dead, seven were never found, over 1,000 injured and over 4,000 people were left homeless. 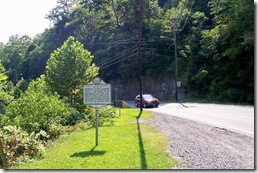 Five hundred and seven houses were lost or demolished 44 mobile homes were destroyed another 273 houses were severely damaged, while nearly 663 houses suffered damage to varying degrees. In addition, 30 businesses, 1,000 vehicles, 10 bridges, and power, water and telephone lines were destroyed, and the county road and the rail lines servicing the valley's coal mines were severely damaged. Property damage was estimated at $50 million. 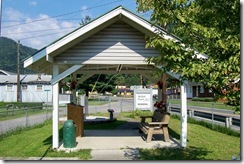 In the days preceding February 26, 1972, rain fell almost continuously, although experts later claimed this was typical for late winter weather in the area. Buffalo Mining officials, concerned about the condition of the highest dam, measured water levels every two hours the night of the twenty-fifth. Although a Pittston official in the area was alerted to the increasing danger, the residents of the hollow were not informed. The company sent away two Logan County deputy sheriffs, who had been dispatched to assist with potential evacuations. Despite the lack of warning from company officials, some residents sensed the danger and moved to higher ground. 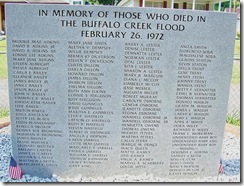 Just prior to 8:00 a.m. on February 26, heavy-equipment operator Denny Gibson discovered the water had risen to the crest of the impoundment and the dam was "real soggy." At 8:05 a.m., the dam collapsed. The water obliterated two other impoundment dams located below Dam #3 and approximately 132 million gallons of black waste water rushed through the narrow Buffalo Creek hollow. 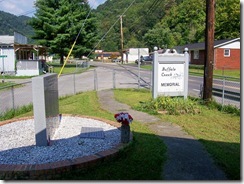 Photo on right taken looking up the hollow on Buffalo Creek from the direction the water would have come. (Click Photos to Enlarge)

Water and coal refuse, 30 feet high and 550 feet across, burst through its hillside location after two days of rain, cascading more than 15 miles down Buffalo Creek in Logan County. Moving at 5 miles per hour, the water took about three hours to wash out a succession of small coal towns and reach the confluence of Buffalo Creek and the Guyandotte River at Man.

West Virginia Division of Culture and History has several web pages detailing the Buffalo Creek Disaster. This site has many photographs, quotes and descriptions of the disaster.

Voices of Buffalo Creek in the Charleston Gazette online version has a series of articles about the disaster including interviews with survivors and others discussing the aftermath of the disaster.

Marshall University has an interactive web site where you can click on a map with the different communities affected and find out about the deaths in that community. They also have about six videos, personal accounts of victims, a few photos and the Governor's report.

Posted by Little Bits of History at 8:25 AM