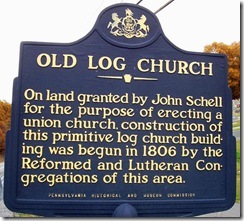 Marker Text: On land granted by John Schell for the purpose of erecting a union church, construction of this primitive log church building was begun in 1806 by the Reformed and Lutheran Congregations of this area.

Location: On the Lincoln Highway (U.S. Route 30), near Cemetery Road, just West of Schellsburg, PA. Erected by the Pennsylvania Historical and Museum Commission in 1974. 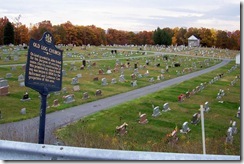 I have taken many photos of old churches and their related historical markers. Many of the surviving church buildings were constructed in flemish bond brick or other brick structures and only a few were wooden frame. In looking at the history of many churches, you discover that they frequently began as log churches and most were replaced by brick structures over time. A few of these original log churches do exist, such as this one outside of Schellsburg, PA, which celebrated their 200th anniversary in 2006. 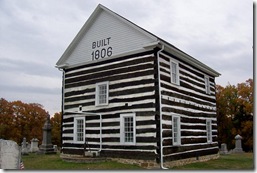 Over two hundred years ago, a German named John Schell, moved further west from early settlements in eastern Pennsylvania about 1798-1799. He purchased a large tract of land nine miles west of Bedford, PA. Schell was a very religious man and decided that this unsettled land needed a church and he donated about six acres of land for the purpose of building a church. In 1806, settlers of the German Reformed and Lutheran faith built this log structure to serve as their place of worship. Later in the 19th century the log structure had siding put over the logs. After the church was completed, Schell “laid out” the town of Schellsburg, Pennsylvania in 1807. 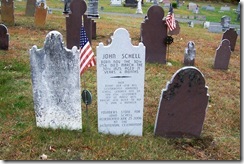 The Old Log Church was used for worship until about 1852. The Lutheran denomination erected a large brick church in Schellsburg around 1843. The Reformed congregation broke ground for their new church in Schellsburg on March 1, 1851. The old log church lies on a remnant of the old Lincoln Highway.

Members of the Lutheran, Reformed, Methodist, and Presbyterian churches were named as corporators of the cemetery of which the governor approved the charter on March 17, 1860 for the formation of the Chestnut Ridge and Schellsburg Union Cemetery. The land for the cemetery was deeded in 1897. In 1806 the first burial took place and since that time has been used as a burial place for area residents. John Schell's grave is in this cemetery. While looking through the gravestones, I discovered the tombstone for Frederick C. Goeb who was an early printer who moved to this area. He is credited with printing the first Bible in Somerset in 1813. This reportedly was the first printing of the Bible west of the Alleghenies or the Susquehanna River depending on what account you read. I was not able to learn to much other information about him.

Nearly 200 years later the "Old Log Church," as residents have come to refer to the church, was placed on the National Register of Historic Places in January of 2005.

Posted by Little Bits of History at 11:21 AM