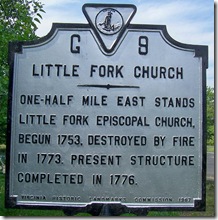 Sunday morning, so it is time for another church, an Episcopal church in Virginia. Little Fork Church is the only Colonial church in Culpeper County, VA and one of the few colonial churches to survive in northern Piedmont Virginia, however, it was never a parish church. Created in 1731 as a "chapel of ease" for the St. Mark's Parish within the Little Fork between the Rappahannock and Hazel Rivers by order of Governor Spotswood. 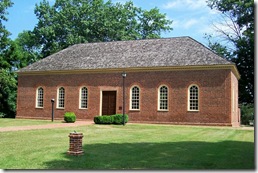 Little Fork Church was erected during the years 1774-76 at a cost of 30,000 pounds of tobacco, to replace an earlier wooden structure destroyed by fire in 1773 and another structure also destroyed by fire around 1750. It is believed that Little Fork was designed by John Ariss, to whom the nearly identical Lamb's Creek Church (1769-70) is also attributed. 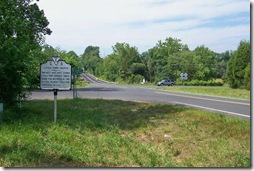 Little Fork's general design is similar to that of Bruton Parish Church in Williamsburg, Virginia. The pulpit is positioned in the center of the north wall and reflects the emphasis on the sermon as the dominant action of worship in the eighteenth century. The pews are of low boxed design, each with three bench seats and a draft stopping door. It is assumed that in each pew the occupants provided a portable foot warmer.

Little Fork Church is a one-story brick structure which measures approximately 83½' X 33½'. Its walls are laid in Flemish bond with random glazed headers above and below the water table. Most of the brick below the water table and the brick gutter have been covered by cement. Rubbed brick marks the four corners of the building as well as the window jambs, principal window arches and original door jambs. The long south wall of the church is divided into seven-bays containing six semi-circular arched windows and a central door. The central door, was well as the west door, has been altered but probably both originally featured brick pediments. The whole of the building is surrounded by a modillion cornice (probably the original) and is crowned by a hipped roof. 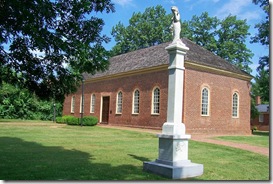 Services at Little Fork ceased at the onset of the Civil War. Early in the war, the church grounds were used as a drill field by the "Little Fork Rangers", more correctly known as Co. D 4th Virginia Cavalry. Later, Union troops quartered at the church destroyed most of the interior furnishings for firewood in the cold winter of 1863, leaving only the shell of the building. Sometime after the war, a “contrite Union officer” reputedly sent $100 to the church for the construction of new pews to replace those vandalized for campfires. 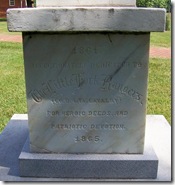 On the south lawn there is a marble monument to commemorate the "Little Fork Rangers." At the dedication of the monument in 1904, surviving members of the Rangers gathered once more.

After the war, the church was used by a Methodist congregation, except for an annual Episcopal service each summer when members of St. Stephen's in Culpeper would travel to Rixeyville for the service and a picnic. A painstaking restoration was undertaken in 1976; St. Stephen's was instrumental in this accomplishment. The restoration was completed in 1979. The church was reconsecrated on October 20, 1979. In 1989, the worshipping congregation obtained church status within the Diocese of Virginia.

The Little Fork Church web site has more photos of exterior and interior of church as well as additional history.

This work is licensed under a Creative Commons Attribution No Derivatives license.
Posted by Little Bits of History at 9:26 AM